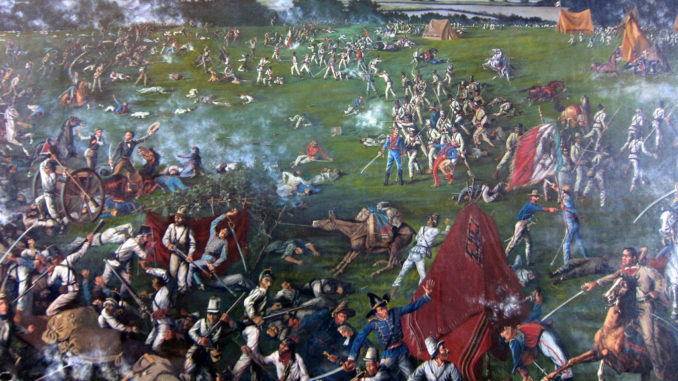 As part of the Mexican invasion of Texas in early 1836, Antonio Lopez de Santa Anna and his main force of at least 5000 men followed an inland route toward San Antonio. At the same time, Mexican General Jose Urrea with some 900 troops, left Matamoros and followed a coastal route into Texas.

The first town approached by Urrea was San Patricio, where on February 27 he encountered Frank Johnson and about 50 Texans. Johnson and four of his men escaped, but the rest were either killed or captured. A few days later, the Mexicans also fell upon James Grant and another 50 men, and all but one of the Texans were killed.


Citizens of Refugio, the next town in Urrea’s path, were slow to evacuate. To provide assistance, James W. Fannin, commander of forces at Goliad, sent two relief forces. The first of these groups numbered about 30 men under Aaron King, followed by a larger group of some 150 men under William Ward. Like Johnson’s force, both of these groups were eventually killed or captured by the Mexicans.

Meanwhile back in Goliad, Fannin and his remaining force of about 350 were called on to aid William Barrett Travis and the Alamo defenders. Afterward, he was also ordered by Sam Houston to retreat back to Victoria. Due to indecision and carelessness by Fannin, however, he failed to accomplish either of these missions.

After a five day delay of following Houston’s order, Fannin finally began his retreat. It was not long, however, before the Texans found themselves surrounded on the open prairie. Several attacks by Urrea resulted each time in the Mexicans being repulsed by the deadly fire of the Texans. By dusk, the Texans had lost about sixty men killed or wounded against some 200 of the Mexicans.

Still heavily outnumbered and with no water and few supplies, the Texans waived the white flag of truce the following morning. Believing that they would be taken captive and eventually returned to their homes, the Texans surrendered the morning of March 20. They were escorted back to Goliad as prisoners.

When news of their capture reached Santa Anna, however, he was furious that the Texans had not been executed on the spot. Citing a recently passed law that all foreigners taken underarms would be treated as pirates and executed, Santa Anna sent orders to execute the Goliad prisoners.

Santa Anna’s orders were followed. On Palm Sunday, the 27th of March, the prisoners were divided into three groups, marched onto open prairie, and shot. Thus, all of Fannin’s command except a few that managed to escape and several physicians and others deemed useful by the Mexicans, were massacred, collected into piles, and burned.

Like the defenders at the Battle of the Alamo who died only three weeks earlier, the men of Goliad served as martyrs for the remaining forces in Houston’s army. Three weeks later, the Texans sought their revenge. Inspired by the cries of “Remember Goliad” and “Remember the Alamo,” the outnumbered Texans won one of history’s most decisive victories at the Battle of San Jacinto.