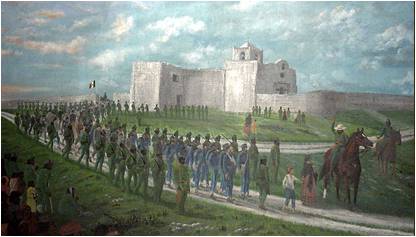 The town of Goliad held a strategic position at the time of the Texas Revolution. It was located about 50 miles up the San Antonio River on a key route between San Antonio and the port of Copano on the Gulf coast. Thus, any Mexican naval supply line to San Antonio passed by the town. Further, Goliad was the site of a well-fortified Spanish presidio elevated above the banks of the river.

In a plan to reinforce Mexican forces at Goliad and San Antonio, Mexican General Martin Perfecto de Cos landed at Copano and occupied Goliad on October 2, 1835 with an advanced force. These forces were soon joined by a main force of over 400 men.


By October 5, however, Cos took most of his men and departed for San Antonio. A small residual force of some 30 men remained at Goliad to hold the presidio and the supplies it contained.

Meanwhile, a force of some 50 Texas volunteers under George Collingsworth decided to take the Goliad presidio. Marching from nearby Victoria, they were joined by Ben Milam just prior to the attack in the late evening of October 9. The Texans entered the presidio by forcing through the doors of the adjoining church and overtook the Mexican defenders in a matter of a few minutes. Casualties were light on both sides.

In taking Goliad, the Texans not only gained the strategic presidio but also captured much-needed supplies. These were used in the following months to help sustain the Texas forces during the Siege of Bexar. The small attack force of Texans was soon augmented by a larger group of volunteers.