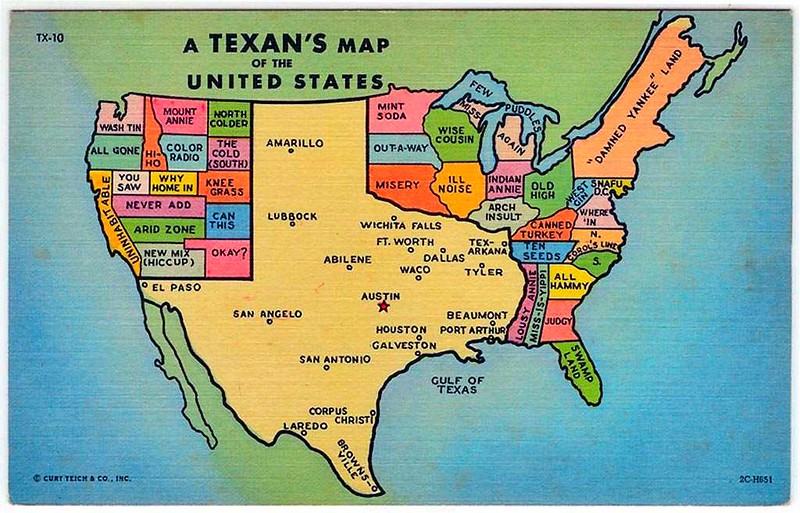 Why is Texas so big?

New Union states were historically created by subdividing territories. Texas was already a large independent republic at the time it joined the Union and was not divided up. At one point in history, Texas was even larger covering some of New Mexico, Colorado, Oklahoma, and Kansas. You’ll need to dig deep into the rich Texas history to get the full story.


How Big is Texas Compared to the United States?

Texas is 268,597 square miles and the US is 3.797 million square miles so Texas is roughly 7% of the total land size of the US. In other words, the United States is 14 times larger than Texas. From an economic perspective, the 2 trillion dollar Texas economy is about 8% of the 25 million dollar US economy. In 2021 the population of Texas was about 29.53 million people which is roughly 8.8% of the total US population of 332 million people.

10 Little-Known Facts about the Size of Texas

How many states can fit in Texas?

Fifteen of the smallest US states could fit within Texas simultaneously including Kentucky, Virginia, Indiana, Maine, South Carolina, West Virginia, Maryland, Vermont, New Hampshire, Massachusetts, New Jersey, Hawaii, Connecticut, Delaware, and Rhode Island.  Individually, every state except for Alaska can fit in Texas.  California, the third-largest state can fit into Texas about 1.6 times. Rhode Island, the smallest state at only 1,212 square miles, can fit into Texas about 221 times.

Is Texas bigger than England?

Yes, England is less than one-fifth of the size of Texas in land area. England is just 50,346 square miles compared to Texas’ 268,597 square miles. At its widest, England is only 181 miles east to west and 346 miles north to south. England’s capital and most populous city, London, is just smaller than the land area of Houston. However, London has a population of almost 9 million while Houston’s population is just over 2.3 million. Overall, England’s population rests at 56.29 million with Texas at 29 million residents. Economically, England’s GDP is 1.3 times larger than that of Texas. England has a GDP of $2.5 trillion, while Texas has a GDP of $1.887 trillion. Per capita, however, Texas’ GDP was $61,682 in 2019, with England’s at $42,300 in 2019.

What Country is the same size as Texas?

Is Texas Bigger than the UK?

Is Texas Bigger than France?

Is Texas Bigger than Germany?

Is Texas bigger than Japan?

Texas is 84% larger, or almost twice the size of Japan. To be more specific, Texas is 268,597 square miles and Japan is 145,937 square miles. Interestingly, the population of Japan at 125.8 million is 4.3 times that of Texas at 29.2 million so you can imagine how the population density differs between the two areas. Similarly, the GPD of Japan at $5 trillion is roughly 1.5x larger than the $2 trillion GDP of Texas.

Which is Bigger – Texas or California?

How many acres is Texas?

How long does it take to drive across Texas?

It takes 11 hours to drive 773 miles from east to west across Texas. Of course, you’ll need to plan an additional hour or two of stops to be safe. Starting in El Paso, you would drive east on I-10 until you reach I-20 after about 160 miles. From there, you would take I-20 through Odessa, Abilene, the Dallas-Ft. Worth Metroplex, and to Waskom, one of the farthest east cities just before the Texas-Louisiana border. Alternatively, you can fly four hours from El Paso to Shreveport Regional Airport just on the Louisiana side of the Texas-Louisiana border.

If you are interested in what it might look like to drive across Texas on I-10 from El Paso through Houston, check out this cool timelapse video.

How long does it take to drive across Texas, North to South?

It takes around 13 hours to drive the 805 miles from the northernmost point to southernmost in Texas. You would start in Texhoma, a small town that sits on the border of Texas and Oklahoma then drive south through Lubbock, San Antonio, and all the way down to Brownsville, the southernmost city on the tip of Texas.  Add few stops at Buc-ee’s and Whataburger and you’ll probably be closer to 15 hours.

3 thoughts on “How Big is Texas? You Won’t Believe How Huge It Is!”