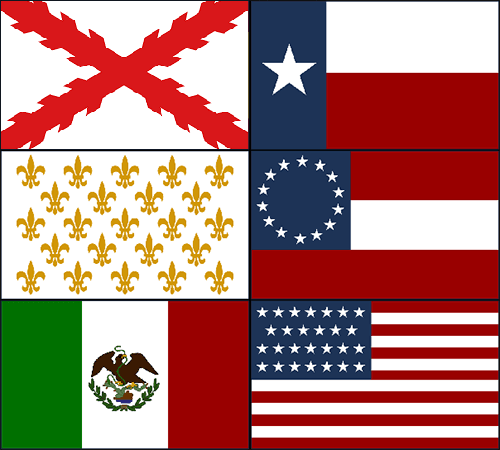 Six different governments have controlled Texas and six national flags have flown over Texas since the first European exploration of the region by Cortez in 1519. The six flags are the Spanish, French, Mexican, Republic of Texas, Texas Confederacy, and finally the United States Flag. Check out the flags, dates, and details below.

Spain was the first European nation to claim what is now Texas, beginning in 1519 when Cortez was establishing a Spanish presence in Mexico, and Alonzo Alvarez de Pineda mapped the Texas coastline. A few shipwrecked Spaniards, like Alvar Nunez, Cabeza de Vaca, and explorers such as Coronado, occasionally probed the vast wilderness, but more than 100 years passed before Spain planted its first settlement in Texas: Ysleta Mission in present El Paso, established in 1681. Gradually expanding from Mexico, other Spanish missions, forts, and civil settlements followed for nearly a century-and-a-half until Mexico threw off European rule and became independent in 1821. The red and yellow striped Spanish flag after 1785 depicts a lion of Leon and a castle of Castile on a shield surmounted by a crown.

Planning to expand its base from French Louisiana, France took a bold step in 1685, planting its flag in eastern Texas near the Gulf Coast. Although claimed by Spain, most of Texas had no Spanish presence at all; the nearest Spanish settlements were hundreds of miles distant. French nobleman Rene Robert Cavelier, Sieur de la Salle, founded a colony called Fort St. Louis. But the effort was doomed by a series of calamities: shipwreck, disease, famine, hostile Indians, and internal strife resulting in La Salle’s murder by one of his own company. by 1690, France’s bold claim to Texas had evaporated. The French flag features a host of golden Fleurs-de-lis emblazoned on a field of white, which was actually the French royal ensign for ships and forts.

For more than a decade after Mexico became independent, hardy pioneers from the Hispanic south and the Anglo north flowed into Texas. It was a frontier region for both; Anglo Texans became Mexican citizens. But divergent social and political attitudes began to alienate the two cultures. The final straw: Mexican General Santa Anna scrapped the Mexican federal constitution and declared himself dictator. Texans revolted and won their independence on April 21, 1836, on the battleground of San Jacinto near Houston. Mexico’s intricate flag pictures an eagle, a snake (an image from pre-Columbian mythology), and cactus on bars of brilliant green, white and red.

During nearly ten years of independence, the Texas republic endured epidemics, financial crises, and still-volatile clashes with Mexico. But it was during this period that unique accents of the Texas heritage germinated. Texas became the birthplace of the American cowboy; Texas Rangers were the first to use Sam Colt’s remarkable six-shooters; Sam Houston became an American ideal of rugged individualism. Texas joined the United States on December 29, 1845. The red, white, and blue Texas state flag with its lone star (the same flag adopted by the republic in 1839) today flies virtually everywhere: on government buildings, schools, banks, shopping malls, and even on oil derricks.

Sixteen years after Texas joined the union, the American Civil War erupted. Gov. Sam Houston, urging Texans to stay aloof or re-establish a neutral republic, was driven from office. Texas cast its lot with the doomed southerners, reaping devastation and economic collapse as did all Confederate states. But two events fixed Texas and Texans as somehow different in the nation’s eyes. First, Texas troops on Texas soil won the final battle of the Civil War, not knowing the south had capitulated a month earlier. Second, returning Texans found a population explosion of wild Longhorns, sparking the great cattle-trail drives that became American legends. The first Confederate flag flown in Texas was the South’s national emblem, “The Stars and Bars” of the Confederate States of America, although the later-crossed Confederate battle flag is better known today.

On joining the union, Texas became the 28th star on the U.S. flag. Shrugging aside defeat and bitter reconstruction after the Civil War, the offspring of Texas pioneers marshaled their strengths to secure a future based on determined self-reliance. First was the fabled Texas Longhorn, providing beef for a burgeoning nation. Newly turned topsoil on vast farm acreage yielded bountiful crops. The 20th Century dawned with the discovery of fabulous sources–gushers roaring in at a place called Spindletop near Beaumont. By mid-century, modern Texas industries were sprouting in a fertile climate of advanced technology. Today under the magnificent “Star-Spangled Banner,” Texas horizons continue to expand, thrusting up to the limitless reaches of outer space.