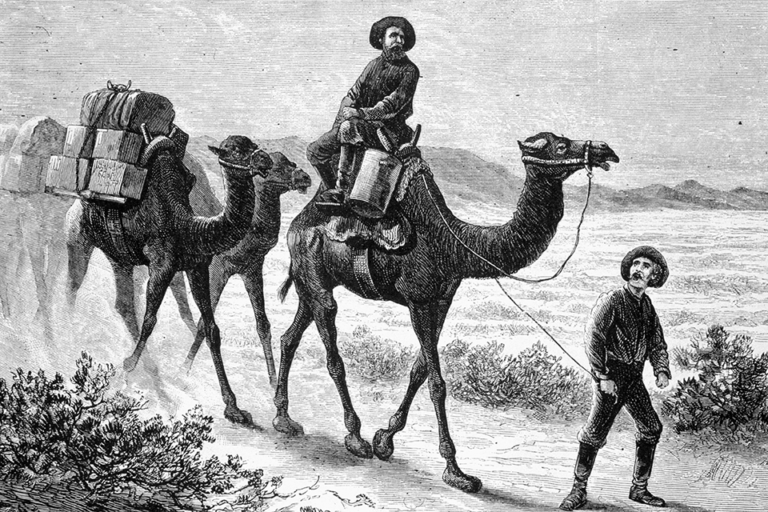 Following the California gold rush of 1849, there became an increasing need to protect and supply the growing population of Americans in the southwest. After attempts to build a transcontinental railroad succumbed to sectional politics, U.S. Secretary of War Jefferson Davis decided to experiment with camels as a means for transporting military provisions across west Texas and the “Great American Desert.”

As a result, Major H. C. Wayne was dispatched to the middle-East in 1855 to study and procure the first group of dromedaries. He returned the following year with thirty-three animals. They disembarked, together with several Greek and Turkish drivers, at Indianola, Texas on May 14, 1856. The curious-looking caravan stopped in San Antonio, where it was demonstrated that one of the “beasts of the desert” could rise from its knees with two bales of Texas cotton tied on its back. The herd was then moved to more permanent quarters at Camp Verde, just south of the present town of Kerrville. Another herd of 41 camels arrived the following year.


Over the next several years, the camels were put to further tests, in which they were used alongside mules on extended trips throughout west Texas and as far west as California. In many ways, the camels proved themselves as superior transport animals. They were able to carry loads over long stretches without water and with very little forage–trips in which most mules would have perished.

Ultimately, however, the camels failed. Their soft-padded feet were unsuitable for travel over much of the rocky southwestern terrain. They frightened horses and they were detested by their handlers, who were accustomed to more docile mules.

The camels fell into Confederate hands at the beginning of the Civil War, then back to the Union Army in 1865. Most were sold at auction in 1866. A few escaped into the west Texas desert and are known to have survived until late in the nineteenth century.