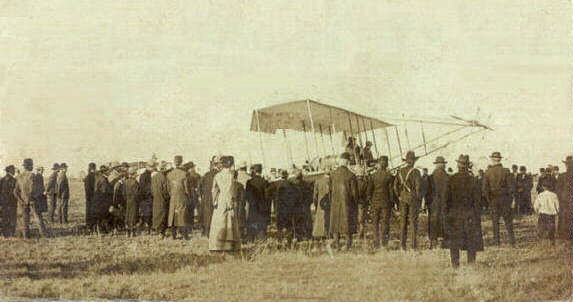 As early as the 1860’s, balloonists in Texas took to the air in experiments that seemed to defy the laws of gravity. Within a few years, however, these early efforts in aviation were directed toward the development of the winged craft.

Even today, claims persist that Texas inventor Jacob F. Brodbeck became the world’s first aviator. According to legend, he flew his “air-ship” on September 20, 1865–almost forty years before the Wright brother’s famous flight at Kitty Hawk, North Carolina. Brodbeck’s flight allegedly took place about three miles east of Luckenbach. According to reports, the flight ended in an unfortunate landing which destroyed the craft but left Brodbeck without serious injury.


Despite these reports, it is generally agreed that the first confirmed winged flight in Texas took place in South Houston several years after the Wright brother’s flight.  The historic flight in Texas was made by Louis Paulhan, a Frenchman, on February 18, 1910.  This time, cameras and a small crowd of people were on hand to witness the event.

Flights in other Texas cities soon followed.  Within two weeks of Paulhan’s flight, the army Lt. Benjamin Foulois successfully completed a similar feat in San Antonio. Foulois used the Wright brother’s biplane, which had been purchased by the U. S. Army.  Three years later, the Army’s First Aero Squadron was assigned to Texas City with a “fleet” of nine aircraft.

Since these early flights, many other Texans have considerably advanced the field of aviation.  Sisters Marjorie and Katherine Stinson of San Antonio became well-known women pilots.  Wiley Post and Howard Hughes continued the tradition into the 1930s and beyond.

The flat terrain and year-round warm climate in Texas made it an ideal region for flight training during both World Wars.  Early airfields and facilities throughout the state were used in training thousands of pilots, mechanics, and other aviation personnel to establish Texas as a key resource in-flight technology.  This resource continues to be tapped today in an age of manned spacecraft.