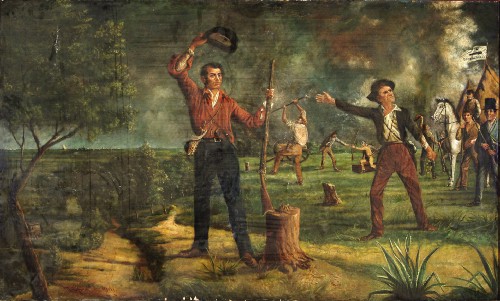 In December of 1835, San Antonio de Bexar was under the control of Mexican General Perfecto de Cos with about 1200 soldiers from Mexico. For almost two months, Texas volunteers had camped near the town in a virtual standoff with Cos. The stalemate ended, however, when one of the Texas leaders, Ben Milam, returned from a brief absence to find that the Texans were about to withdraw to Goliad.

Voicing strong opposition to the retreat, Milam appealed to the Texans with his now-famous words, “Who will will go with old Ben Milam into San Antonio?” Some 300 volunteers responded.


Starting before daybreak on December 5, the Texans, led by Milam and Frank W. Johnson, began their siege. Against heavy odds in both men and artillery, the Texans skirmished for the next two days. On December 7, Milam was shot and killed. The death of their leader seemed to inspire the Texans as they engaged in house-to-house combat that continued for two more days.

At daybreak on December 9, after four days of fighting, Cos signalled a Mexican truce. In exchange for the parole and return of Cos and his men to Mexico, the Texans gained all of the public property, guns and ammunition in San Antonio.

During the siege, the Texans lost only four men killed (including Milam) and fifteen wounded. They gained, however, one of the most important strongholds in Texas. Within a few months, the Mexicans would return to retake the town during the bloody Siege and Battle of the Alamo.