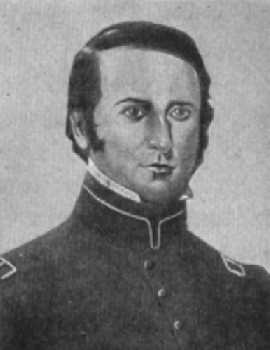 Ben Milam was killed when the Texas Revolution was just getting underway. But his leadership prior to his death helped inspire his fellow Texans to retake San Antonio in 1835 at the Siege of Baxer, and ultimately to win Texas independence.

Milam was born October 20, 1788 in Frankfort, Kentucky, where he lived until joining the American forces in the War of 1812. After the war, he and a friend floated a large shipment of flour down the Mississippi to New Orleans. Finding a weak market for flour, they joined others and chartered a schooner to South America in search of a better market. The captain and most of the crew died of yellow fever, but Milam and his friends managed to survive.


By 1818, Milam was trading with Comanche Indians on the upper Colorado River in Texas. There, he met David G. Burnet, who after an accident was being nursed back to health by the Indians. The two men became close friends.

The following year, Milam returned to New Orleans and joined an expedition to aid Mexican patriots seeking independence from Spain. There, he met and formed a close friendship with James Long, husband of Jane Long. Soon afterward, however, Long was “accidentally” killed in Mexico under suspect circumstances. For planning to avenge Long’s death, Milam was imprisoned for a short time in 1822 but later released.

For several years, Milam assisted empresario Arthur Wavell in developing Wavell’s grant on the Red River, but the venture failed.

Milam joined Texan volunteers in the Goliad Campaign of 1835. Soon afterward, Stephen Austin placed him in charge of a company of scouts to determine the best routes over which to retake San Antonio in the Siege of Bexar. Subsequently, Milam and Frank W. Johnson each lead a group of volunteers in house-to-house combat during the retaking of the town.

On December 7, 1835, Milam was killed by a rifle shot while moving from one position to another. Three days later, the Mexican forces surrendered and vacated San Antonio.