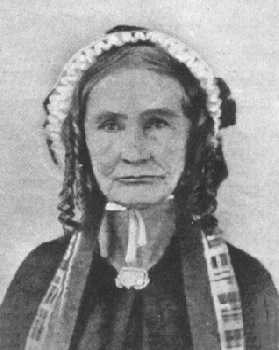 Orphaned at the age of fourteen and widowed at twenty-four, Jane Wilkinson Long led a long and hard life. But her independent and determined character earned for her the title “Mother of Texas.”

Long was born Jane Wilkinson on July 23, 1798 in Charles County, Maryland. Her father died when she was less that one year old. In 1811, she moved with her mother to Mississippi Territory. When her mother died the following year, Jane went to live with her older sister near Natchez.


In early 1815, Jane met James Long, a physician who had come to Natchez following his participation as a surgeon at the Battle of New Orleans. By May of that year they were married and by November of the following year the couple had their first child.

By 1820, Jane had joined her husband at Bolivar Point, a peninsula opposite Galveston Island, where they established an outpost in an effort to help free Texas from Spanish rule. When James Long left Bolivar Point on an excursion in September of 1821, Jane was expecting another child. She stayed behind and vowed to remain at the fort until his return. The plan failed, however, when James was and captured and later “accidentally” killed in Mexico City.

Unaware of her husband’s fate, Jane steadfastly remained at Bolivar Point through the winter of 1821-1822. The few other inhabitants left the fort as supplies ran out. Along with a twelve year old servant and her six year old daugthter, Jane stubbornly survived on dwindling supplies of corn meal, salted fish and osyters scavanged from the bay. As Jane later reported, the trio kept nearby Indians at a safe distance by a ruse designed to give the illusion that the fort was still protected by soldiers. On December 21 in an ice covered tent, Jane gave birth to Mary James Long.

Jane’s ordeal ended the following March when a friend of her husband persuaded her to leave Bolivar Point. And after a few years, she began a remarkable comeback.

By 1832, Long opened a successful hotel in Brazoria, then a primary port for newly arriving emigrants. The hotel soon became a focal point for social and political activities in Texas. In 1835 when Stephen Austin returned from eighteen months of imprisonment in Mexico, a dinner and ball was held at her hotel in his honor.

Throughout her long and active life in Texas, Jane became the object of many admirers and some would-be suitors. These included no less notable Texans than Ben Milam, William Travis, Stephen Austin, Sam Houston and Mirabeau Lamar. She rejected all offers of matrimony, however, and died a widow of James Long on December 30, 1880.

Jane Long is buried at Richmond, Texas. On her gravestone is inscribed “Mrs. Jane H. Long, The Mother of Texas.”