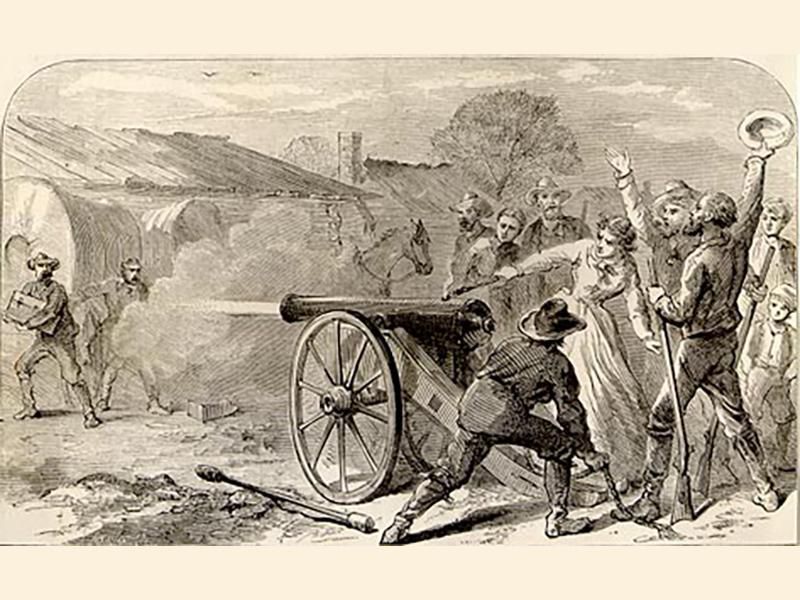 Following Mexican depredations into Texas in 1842, President Sam Houston deemed the still-frontier town of Austin to be in danger of falling into enemy hands. Therefore he ordered the removal of the seat of government, as well as all of its records, from Austin to Houston. This provoked a blustery response from the citizens of Austin known as the Archives War.

On Houston’s first attempt to obtain the papers peaceably, several of the Austinites showed their contempt by shaving the mains and tails of the horses of Houston’s messengers. Undeterred, Houston sent an armed force of thirty men on a follow-up attempt to retrieve the records.


When Houston’s men arrived on the morning of December 29, 1842, they drove their wagons directly to the Land Office building where the records were kept. The Austinites quickly assembled a retaliatory force, charged a cannon, and aimed it at Houston’s men. Mrs. Angelina Eberly, proprietress of a local boarding house, is credited as the one who touched off the cannon. Aside from some damage to the building, the cannon had little effect and no one was hurt. Houston’s men managed to finish loading their wagons and leave town with their cargo.

Austin citizens were as determined as Houston. They pursued and surrounded Houston’s forces that night some eighteen miles east of town. After considerable threats and verbal exchanges, the archives were returned to Austin the following morning. Thus ended the Archive War, decisive though bloodless.