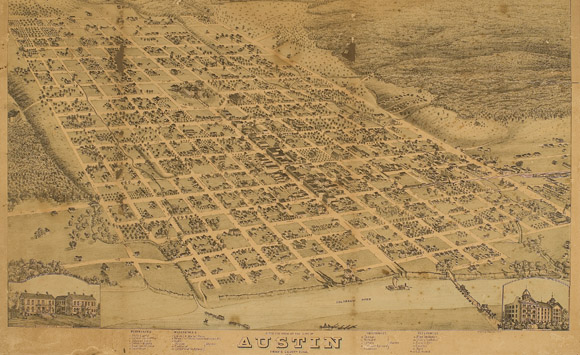 Austin, the capital of Texas, was a barren hill on a bend in the Colorado River when the Texas Revolution was fought. Leaders of the newly formed government selected the site from a short list of sites considered by the Second Congress of the Republic of Texas.

By 1839, however, the town was established and government officials arrived to conduct the business of the Republic. In the early days, the town was beyond the frontier of settlements and particularly vulnerable to attack by Indians and forces from a still unfriendly Mexico. For security, the seat of government was moved back to Houston in 1842, but returned to Austin in 1845, just prior to statehood. A statewide election in 1850 resulted in naming Austin the permanent capital. At that time, the population was barely 600 people.


The capitol building in Austin today was paid for with some 3,000,000 acres of public land in the Texas panhandle. The building was dedicated in 1888.