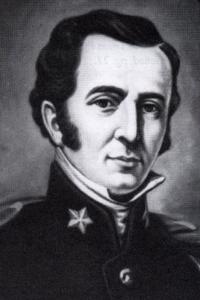 James Walker Fannin was born in early 1804 in Georgia. He was adopted by his maternal grandfather, James W. Walker, and raised on a plantation near Marion. In 1819, he entered the U. S. military academy at West Point under the name of James F. Walker, and remained for just over two years.

Fannin came to Texas with his wife and two daughters in 1834, and settled at Valesco. Soon after his arrival, he became active in the cause for independence from Mexico. He was a participant in the Battle of Gonzales on October 2, 1835. Later the same month, he and James Bowie led the Texas forces in the battle of Concepcion.


In January of 1836, Fannin was appointed by the provisional government as an agent to raise troops and money for the republic. In command of a regiment at Goliad, he received orders from Sam Houston on March 14 to retreat to Victoria. Partly through indecision and partly due to other circumstances, Fannin delayed the retreat for five days. When he finally began the retreat, Mexican forces under General Jose Urrea had advanced to the vicinity of the town.

With his regiment of about 400 men, Fannin surrendered at the Battle of Coleto after being surrounded by the Mexican forces, and were taken back to Goliad. On order of Antonio Lopez de Santa Anna, he was executed along with virtually all of his men on 27 March 1836.