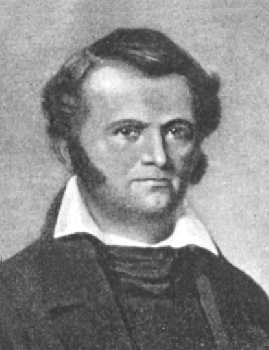 Known for his famous “Bowie knife” and a sometimes reckless adventurer, Jim Bowie is now immortalized as one of the true folk heroes in early Texas.

Bowie was born in Kentucky in 1796. While still very young, he moved with his family, first to Missouri, then in 1802 to Louisiana, where he spent most of his youth. It was there that he first acquired a reputation for his bold and fearless disposition.


In 1827, Bowie participated in a bloody brawl near Natchez, Mississippi, where several men were killed and Bowie was wounded. After recovering the following year, he moved to Texas.

Before the revolution in Texas, Bowie took part in many adventures. He spent considerable time cultivating friendships with Indians in his search for elusive silver and gold reported to be hidden in the interior of Texas. By some accounts, he is said to have found the fabled San Saba mines, also known as the Bowie mines, near the geographic center of present day Texas.

In the Texas Revolution, Bowie was a leading participant at the Battle of Concepcion and in the Grass Fight near San Antonio. He was in command of a volunteer force in San Antonio when William Travis arrived with regular army troops. The two men shared authority during much of the Siege of the Alamo, which caused some personal friction. But pneumonia disabled Bowie, and he was confined to his cot at the time of his death on March 6, 1836 at the Battle of the Alamo.