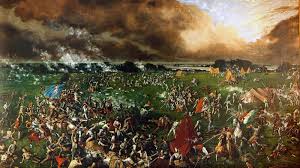 Sam Houston and the meager army of Texans retreated eastward following the fall of the Alamo in the spring of 1836. The troops were becoming increasingly impatient, however, by the time they reached Buffalo Bayou, a few miles southeast of present-day Houston.

On the morning of April 19, the Texans crossed over and marched down the right bank of Buffalo Bayou to within half a mile of its confluence with the San Jacinto River. Here, the army prepared their defenses on the edge of a grove of trees. Their rear was protected by timber and the bayou, while before them was an open prairie.


On the following morning, Mexican General Antonio Lopez de Santa Anna came marching across the prairie in battle array. A volley from the Texan’s “Twin Sisters” artillery brought him to a sudden halt. Falling back to a clump of trees a quarter of a mile distant, Santa Anna’s troops formed in line of battle. Colonel Sidney Sherman, at the head of the Texas cavalry, charged the Mexican army but accomplished little except to inspire the Texans with fresh enthusiasm for the following day.

On April 21st, dawned bright and beautiful. The main forces of the Texas army were there, totaling about 750 men. They faced over 1500 of the enemy, secure and flushed with pride at the offense they had enjoyed for the previous few weeks against the Texans. Early in the morning, Houston sent Deaf Smith, the celebrated Texas spy, with two or three men, to destroy Vince’s bridge over which the Mexican army had passed, thus cutting off their only available escape.

When Houston’s long-awaited order to advance was given, the Texans did not hesitate. When within seventy yards the word “fire” was given, the Texan shouts of “Remember the Alamo” and “Remember Goliad” rang along the entire line. Within a short time, 700 Mexicans were slain, with another 730 taken as prisoners. The battle for Texas was won.

A panel on the side of the monument at San Jacinto today underscores the importance of the battle after more than a century and a half of reflection: “Measured by its results, San Jacinto was one of the decisive battles of the world. The freedom of Texas from Mexico won here led to annexation and to the Mexican War, resulting in the acquisition by the United States of the States of Texas, New Mexico, Arizona, Nevada, California, Utah, and parts of Colorado, Wyoming, Kansas and Oklahoma. Almost one-third of the present area of the American nation, nearly a million square miles of territory, changed sovereignty.”