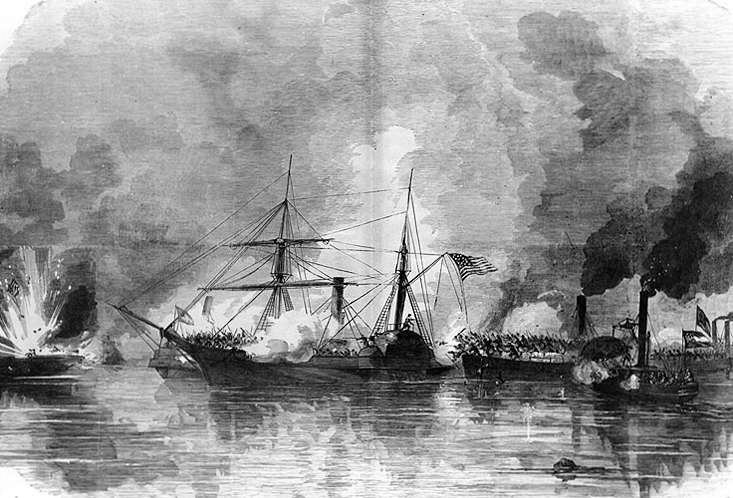 In the fall of 1862, Union Commodore William B. Renshaw sailed into Galveston harbor and demanded the surrender of the island city by its occupants. With virtually no defense force, the Confederate commander on the island, Colonel Joseph J. Cook, had little choice but to comply.

About the same time in late 1862, Major General John B. Magruder was named Confederate commander of the District of Texas. Upon arriving in Houston, Magruder immediately began making plans to recapture Galveston. To implement his plan, Magruder outfitted the decks of two river steamers, the Bayou City and the Neptune, with bails of cotton. The compressed cotton would be used to protect an on-board attack force to challenge the federal fleet in Galveston harbor. A land force would also be used in a joint land-sea attack.


On New Year’s Eve, the Confederate Cottonclads, as the curious-looking vessels were called, threaded their way from Harrisburg through Galveston Bay and toward the western entrance to Galveston harbor.

About dawn on New Year’s Day 1863, the Confederate Cottonclads entered the west end of Galveston harbor. Their nearest and first target was the Union’s Harriet Lane.

After a brief encounter and some maneuvering, the tide of battle foretold an almost certain Union victory. The Confederate ground forces had been outgunned and effectively held in check by the federal warships. After only a brief contest at sea, one-half of the two-vessel Texas fleet was lying on the bottom of the harbor. Further, the lone surviving Confederate Cottonclad, the Bayou City, was outnumbered six-to-one among the armed vessels in the harbor.

Meanwhile, across the harbor, the federal flagship Westfield, with Commodore Renshaw on board, had become hopelessly grounded in shallow water. The crew tried furiously to dislodge her, but she would not budge. At that point, a temporary truce was negotiated as both sides considered their positions.

During the truce, Renshaw decided to destroy the still immobilized Westfield and attempt a federal escape from the harbor. Even this plan went terribly awry. As Renshaw and his crew fused the gunpowder on the flagship and quickly rowed away, nothing happened. They returned for another attempt. But as they debarked the second time, the gunpowder prematurely exploded, rocking the entire harbor. The explosion killed Renshaw and thirteen of his crew.

With flags of truce still flying, the remaining federal vessels stoked their boilers, and quietly began heading for the open sea. In this endeavor they were successful, for the Confederates had little means to pursue.

Thus, the island of Galveston was recaptured. Twenty-six Confederates had been killed and 117 wounded. About twice that many Unionists died in the conflict. The Union’s showcase vessel and nearly 400 men were captured. More importantly for the Texans, however, was that their victory restored control of Galveston to the Confederacy, where it would remain for the rest of the war.