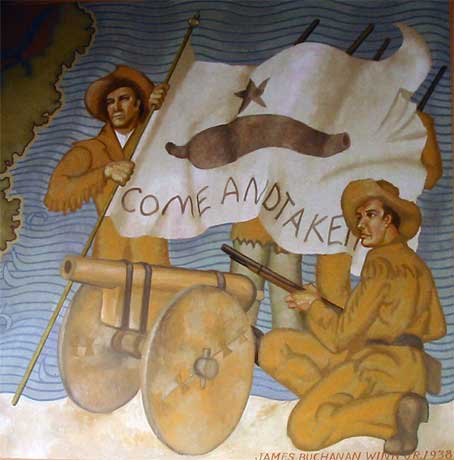 The flags used during the Texas Revolution represented the diverse beliefs of the settlers of the period. In a few designs, the flag signified the desire for reconciliation with Mexico and a return to government based on the Mexican Constitution of 1824. Most of the flags, however, represented the Texan’s desire for total independence from Mexico, and their willingness to fight and die for that cause.

One of the best known of the flags of the Revolution is the “Come and Take It” flag used at the Battle of Gonzales. It was later described also as “The Old Cannon Flag” by Noah Smithwick, one of the participants in the skirmish. According to Smithwick, the flag “consisted of a breadth of white cotton cloth about six feet long, in the center of which was painted in black a picture of the old cannon, above it a lone star and beneath it the words, ‘Come and Take It.'”


The following are a few of the other flags that were flown in the name of Texas, from the eve of the Revolution through the early days of the Republic. A brief description of each is provided below the composite image.

Each of the above flags of the Texas Revolution is identified and briefly described below (clockwise, starting with the “1824 flag” at the top right):