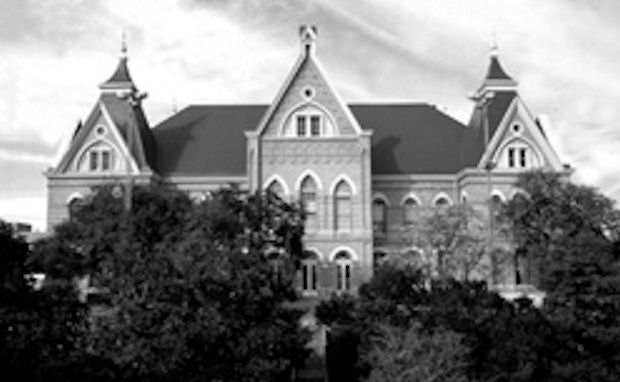 Authorized by the Texas Legislature in 1899, Southwest Texas State Normal School opened its doors in 1903. Over the years, the Legislature broadened the institution’s scope and changed its name several times, then in 2003 to Texas State University-San Marcos.

Built in 1903, Old Main was TSU’s first building, and continues as a central landmark today


In 1893 the 23rd Texas Legislature took the first step toward the establishment of a teachers college at San Marcos by passing a law that the state superintendent of public instruction prescribe a course of study which teachers must complete at North Texas Normal at Denton or at Coronal Institute at San Marcos before they could be eligible to teach in the public schools of Texas.

The Coronal Institute board of control did not choose to change the curriculum to conform to the new law. The 26th Legislature, therefore, in 1899 passed an act authorizing the establishment and maintenance of a normal school at San Marcos, to be known as the Southwest Texas Normal School. The citizens of San Marcos donated eleven acres of land on an elevation known as Chautauqua Hill as the site of the college, and in 1901 the 27th Legislature appropriated $25,000 for the erection of a building.

W. D. Wood, Ed. J. L. Green, and S. V. Daniel were appointed as a local board of trustees. The school opened on September 9, 1903, with Thomas G. Harris as principal, a faculty of seventeen, and an enrollment of 303. In 1911 Harris was succeeded by Cecil E. Evans.

In 1918 the school became a full-fledged senior college, at which time the name was changed to Southwest Texas State Normal College.

The name had been changed, but the objective of preparing teachers remained the same. In 1912 the college entered into an agreement with the San Marcos school board to use two teachers of the local school as demonstration teachers. This arrangement was discontinued in 1914, at which time the college opened its own practice school. In 1917, by local agreement, all of the East Ward School transferred to the Education Building on the campus for demonstration purposes. This arrangement lasted only one year. In 1923 negotiations for a cooperative agreement with the city schools were reopened and continued until 1933 when the arrangements were completed. By this contract the city school became the laboratory school of the college. This unusual plan, one of the few of its kind in American colleges, continued in 1950.

In 1923 the name was again changed, this time to Southwest Texas State Teachers College. In the same year the school was admitted into the American Association of Teachers Colleges.

In 1950, under the direction of John G. Flowers who had succeeded Evans in 1942, the college had in progress an extensive expansion program, both in curriculum and in physical equipment, including six new buildings.

In World War II, the college gave pre-aviation instruction to 2,200 men. In addition the college-trained 1,000 men for war industries. By 1950 the campus had grown from eleven acres to sixty-five, the faculty from 17 to 105, property value from $25,000 to $3,500,000, curriculum from a limited few courses dealing largely with methods of teaching to all the subject-matter branches in which public school teachers need information–from how to teach to what to teach–and enrollment to 2,000.