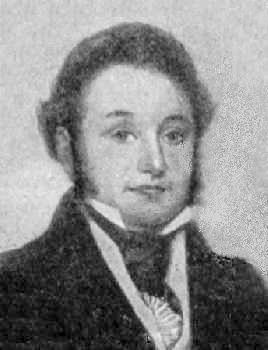 A colonizer and statesman, Manuel Lorenzo Justiniano de Zavala was one of the most talented and capable of the many native Mexicans involved in Texas’ struggle for independence from Mexico. He was born in the villiage of Tecoh in what is now the state of Yucatan, Mexico, on October 3, 1789.

While still in his teens, de Zavala became an ardent advocate of democratic reforms. As a result of his political activism, he was imprisoned in 1814 for three years. When released, he re-entered politics and by 1820 represented Yucatan in the Spanish Cortes in Madrid. However, he returned in 1821 when Mexico gained independence from Spain.


In the newly established Republic of Mexico, de Zavala served in the Mexican Constituent Congress and then the Mexican Senate from 1822 until 1826. He was then elected governor of the state of Mexico, just west of Mexico City. After serving in addition as minister of the treasury under Mexican President Guerrero, de Zavala was granted an empresario contract to introduce five hundred families into Texas. Within a short time, however, he transferred his contract to the Galveston Bay and Texas Land Company.

After again serving several positions in Mexican politics, he was appointed as Mexican minister to France by President Antonio Lopez de Santa Anna. While in Paris, however, it became clear that Santa Anna had no intention of observing the Mexican Constitution of 1824. As a result, de Zavala moved his family to Texas, where he actively supported Mexican Federalism in opposition to Santa Anna.

In Texas, de Zavala settled his family on Buffalo Bayou across from what would become the site of the Battle of San Jacinto. He represented Harrisburg Municipality at both the Consultation of 1835 and the Convention of 1836, where he signed the Texas Declaration of Independence from Mexico.

At the Convention of 1836, de Zavala was elected vice-president of the ad interim government of the Republic of Texas. After Santa Anna’s capture at the Battle of San Jacinto, de Zavala and Secretary of Treasury Bailey Hardeman were commissioned to accompany Santa Anna to Mexico to negotiate a permanent treaty, but outraged soldiers of the Texas army circumvented this plan and detained Santa Anna for several months.

De Zavala resigned as vice-president in October. The following month, on 15 November 1836, he died and was buried in the family cemetery on property which is now part of San Jacinto State Park.

De Zavala county was formed in 1858 and named in his honor. In 1931, the state of Texas erected a monument at his gravesite.