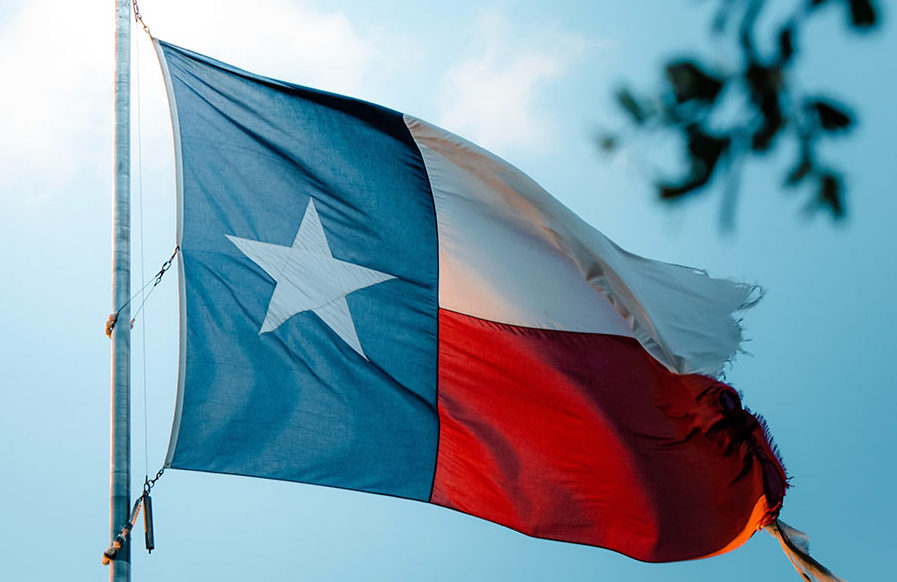 Texas. The “Lone Star State”. The nickname was made notable by the single star on the state flag. Texas has a long history of notable flags. Have you ever been to a Six Flags theme park? It is said that the name comes from the six nations that once ruled over the state. The history of the flag of Texas is as rich and beautiful as the state itself.

The flag of Texas is a resounding symbol of the history of Texas. It is a symbol of how hard they had to fight for their land. That they would make the great sacrifice like at the Alamo. It makes sense that Texas is the only state whose flag once belonged to a sovereign country. While Texas had gone through its last official flag change in 1870, it should be noted that in 1939 the Congress of Texas voted to change the state flag. It went from a flag with a bright yellow star in the middle of a dark blue background to the flag we know today.


The official description of the Texas flag, recently adopted by the state legislature, specifies the exact proportions of each of its elements.

“The state flag consists of a rectangle with a width to length ratio of two to three containing: (1) a blue vertical stripe one-third the entire length of the flag wide, and two equal horizontal stripes, the upper stripe white, the lower red, each two-thirds the entire length of the flag long; and (2) a white, regular five-pointed star in the center of the blue stripe, oriented so that one point faces upward, and of such a size that the diameter of a circle passing through the five points of the star is equal to three-fourths the width of the blue stripe.”

What is the history of the Texas Flag?

The history of the flag of Texas begins with the colonization of the state, but it was Spanish explorer Alonso Alvarez de Pineda who first mapped the coastline back in 1519. Afterward, a few Spanish explorers met with the natives but they did not stick around to establish any sort of government. The colonization began in the late 1600s by French explorer Robert de La Salle. La Salle established Fort St. Louis in 1685, but the French were not long for the state of Texas and the Spanish took over.

While under Spanish rule, many missions were established throughout Texas and Mexico to teach the natives Christianity. Little did the Spanish know that they would build a mission that would become a major symbol in the history of Texas, The Alamo. Just like the Americans, the people of Mexico were becoming restless about being ruled by a King overseas and in 1821 won its independence from Spain. In 1825, an American named Stephen F. Austin came to an agreement with the Mexican government to allow him to settle a colony with 300 people. The colony grew extremely fast and with that came animosity between the Mexican government and the colonists. By 1835 the two came to blows at the Battle of Gonzales, which sparked fighting to take place all through Texas.

The Battle of the Alamo in 1836 is where the war took a turn in favor of the Texans. Even though the battle was technically a loss with 180 Texans including legendary men such as Davy Crocket and Jim Bowie, held off an army of 4,000 Mexican troops for nearly two weeks before being overcome. After this loss, on March 2nd, 1836, Texas declared independence from Mexico and formed the Republic of Texas giving them their fourth flag. It was under this flag and under the battle cry, “Remember the Alamo,” Sam Houston and his army defeated the Mexicans at the Battle of Jacinto.

Texas remained a country until 1845 it was decided it would be better if Texas joined the United States for protection and trade. On December 29th it became the 28th state, establishing the Republic of Texas flag as the state flag.

The admission of Texas as an American state angered Mexico and would end up being the cause of the Mexican American War. It took the Americans a year and a half to defeat the Mexican Army and the Treaty of Guadalupe-Hidalgo was signed in 1848. Peace was enjoyed throughout Texas until 1861 when it seceded from the Union and joined the Confederate States giving Texas its sixth national flag.

Even though there was little confrontation in Texas during the Civil War, it should be known that the slaves in Texas did not know that they were free until June 19th, 1865, or as we know it now, Juneteenth. It was not until 1870 that Texas was readmitted to the United States of America.

What do the Texas flag colors mean?

The flag of Texas has an incredible history. A history quite unlike any other state. Over the years Texas has been under the rule of six different countries. Over the years of fighting and hardship, Texas has come to have an identity of its own and that can be seen in the colors of the Flag. In 1939, the congress of Texas voted to change the colors of the flag from a yellow star in the middle of a dark blue background to what we see today. Todays flag has a single white star on the left-hand side in the middle of a blue bar. There are two horizontal bars on the right the top being white and bottom being red. While these colors do match that of the United States, it is said that the blue stands for loyalty, the red for bravery, and the white for purity.

Is Texas the only state that can fly its flag at the same height as the US flag?

It is well established that Texas has a very unique history. So many nations have called it theirs, including the short-lived Republic of Texas. It is also well known that Texans are proud people, and there are many who believe that the Texas flag is the ONLY state flag that can fly at the height as the US flag. This is however not the case. Under the United States Flag Code it is said that if the US flag and a state flag share a pole, the US flag must be on top, if the two have separate poles the flags can be at the same

What does the lone star of Texas signify?

When one first hears the word Texas, their minds automatically go to the flag and the lone star. What does it mean exactly? As everyone knows, Texans are very proud people. Given the history of Texas it is not hard to recognize why they are so proud. Just like the US flag the stars stand for all the states standing together under one country, and the lone star stands for the unification and the solidarity of the people of Texas under “God, state, and country”.

The creation of the “Lone Star” flag of Texas is shrouded in mystery. The most common theory is that the flag design was suggested by Texas Republic interim president David Burnet and designed by Austin artist Peter Krag for $10. The design was approved on January 25, 1839, and signed by Mirabeau Lamar, President of the Republic of Texas.

Interested in purchasing a Texas State Flag? We recommend the American Flag store