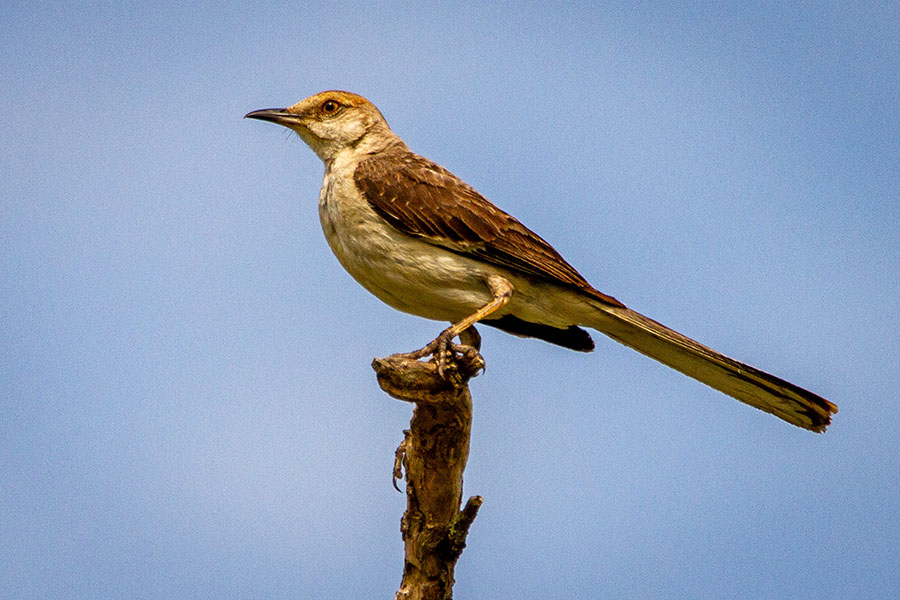 In 1920 the Texas Federation of Women’s Club recommended the Mockingbird become the Texas symbol as the state bird. The Texas State legislature agreed that the mockingbird was the most appropriate species for the state bird of Texas as a fighter for the protection of his home, like any true Texan. On January 31, 1927, Governor Dan Moody approved the measure and Texas became the very first state to choose a state bird.

Now the mockingbird is ingrained in Texas’s heritage and the bird’s melodies can be heard from the streets of Dallas to the mountains in west Texas. Texans agree that the mockingbird has the prettiest song of any bird native to North America. Known scientifically as the Mimus Polyglottos which means “many-tongued mimic” in Latin, the song of the Mockingbird is a medley of the calls of many other birds. Each imitation is repeated two or three times, then another song is started, all in rapid succession.


The mockingbird imitates the sounds and chirps of 35 different bird species and even mimic sirens and crickets. Scientists believe that male mockingbirds learn these songs to show off for potential mates. Most mockingbird couples remain monogamous for life and continue to breed and build nests of twigs, sticks, grass, and leaves together year after year.

The Mockingbird diet depends on the season and location but it is primarily fruit, seeds, berries and small insects such as beetles, earthworms, and moths. Spread out throughout Mexico, most of the United States, and parts of Canada, the mockingbird is able to thrive in diverse environments, climates, and habitats. They’ve made a name for themselves around the world as a bird that sweetly serenades passerby’s all day with complex melodies and sometimes continue singing into the night.

Why is the mockingbird the state bird of Texas?

In short, the Mocking bird is the Texas state bird because it is a fighter for the protection of his home, just like any true Texan.

The long version of the story starts in 1920 when the General Federation of Women’s Clubs had an idea that each state should have a bird mascot. The Texas Federation of Women’s Club nominated the Mockingbird to represent Texas. This nomination was extremely popular and the Texas State legislature noted that the mockingbird was “the most appropriate species for the state bird of Texas, as it’s found in all parts of the state, in winter and in summer, in the city and in the country, on the prairie and in the woods and hills, and is a singer of a distinctive type, a fighter for the protection of his home, falling, if need be, in its defense, like any true Texan.”

On January 31, 1927, Governor Dan Moody approved the measure and Texas became the very first state to choose a state bird. Since then, Tennessee, Florida, Mississippi, and Arkansas have followed in Texas’s lead and have also adopted the Mockingbird as their official state bird. The admiration of the Mockingbird among state legislatures has left many wondering why the modest-looking bird is so popular. While its appearance is less than spectacular, the Mockingbird is one of the only birds that can bless our ears with up to 200 different songs.

Is it illegal to own a Mockingbird in Texas?

It is illegal to own or capture a Mockingbird in any part of the United States. Under Title 16 of the U.S. Code, sections 703 and 707a, it is illegal to “pursue, hunt, take, capture, kill, attempt to take, capture or kill, possess… at any time, or in any manner, any migratory bird… or any part, nest, or egg of any such bird.”

Sadly, the beautiful songs of the Mockingbird nearly led to its extinction in the 19th century when populations plummeted due to citizens capturing the bird in hopes of making it a pet. In 1828, Mockingbirds were sold in major cities such as Philadelphia, St. Louis, and New York for as much as $50 or $1300 today when adjusted for inflation.

While everyone would love to hear the bird’s enchanting melodies daily, capturing it as a pet could put the survival of the entire species at risk. This is especially significant as Northern Mockingbird populations have declined by about 21% percent from 1966 to 2015, according to the North American Breeding Bird Survey. Despite these losses, mockingbird populations are still common and have slowly rebounded in some areas.

Is it illegal to shoot a Mockingbird in Texas?

Yes, it is illegal to kill a mockingbird in Texas. The Northern Mockingbird has been protected by state and federal laws for more than seventy years.

Shannon Dwayne Mischke, a Texas local, quickly learned of this law when he took out his .410 shotgun and killed a mockingbird that was pecking at his vegetables and contaminating feed troughs for his livestock. Only a few hours later, a deputy showed up at his house and issued a Class C misdemeanor citation and $500 dollar fine. While the punishment might seem like only a slap on the wrist, corporations have fared much worse than individuals.

Jim Noble, assistant U.S. attorney, brought charges against the Spindletop Drilling Corporation in 20017 after they concealed evidence that they had killed 12 mockingbirds. The matter was settled in the U.S. District Court of Texas where Spindletop president Chris Mazzini accepted a plea agreement for two years probation and a $10,000 restitution paid to the National Fish and Wildlife Foundation. Facing a six-month prison sentence and the possibility of a $15,000 fine, Mazzini was lucky to not have to serve time. While this may seem harsh, the Mockingbird is an essential part of Texas’s ecosystem and the protection of the bird ensures that future Texans will enjoy their breathtaking songs.

Where is the northern mockingbird found?

The northern mockingbird’s habitat is exceptionally versatile, which has allowed the species to quickly spread and thrive in many parts of the world. Originally found in the South, the bird populations began expanding northward in the 19th century to Maine, Vermont, Massachusetts, Ohio, Iowa, and New York as well as provinces such as Novia Scotia and Ontario.

The mockingbird is usually a yearlong resident of its area, but some of the northernmost populations occasionally migrate south over winter. You can also spot the bird in Hawaii, Alaska, Barbados, St. Helena, Socorro Island, the Cayman Islands, and Tahiti. The most remarkable part of the mockingbird is its ability to live in rural, suburban, and urban areas without issue. The bird has taken a liking to parks and gardens in suburban areas and frequently nests on top of mowed lawns. In rural areas, the bird nests by forest edges, desert scrubs, and chaparrals.

Mockingbirds are known to be territorial species, especially around the mating season and when protecting their nests. Although the mockingbird is only 8.2-10 inches in length, it is known to attack snakes, ravens, hawks, and even cats who come too close to the nest.

When faced with a particularly large attack, mockingbirds can sometimes even solicit help from neighbors by singing a persistent alarm call which can recruit several other adults to the area. When other mockingbirds enter their territory uninvited, it will typically involve a violent fight between males battling male mockingbirds and females trying to run off other females. But don’t fear, unprovoked mockingbirds rarely attack humans unless there is a direct threat to their nest or children.

If you do anger a mockingbird, you may create a lifelong enemy. According to a recent study, mockingbirds can remember people who have threatened them and even start dive-bombing them if they see the person again. The extraordinary behavior, reported in the US journal Proceedings of the National Academy of Sciences, is thought to be the first published account of wild animals in their natural setting recognizing individuals of another species.

Another unfortunate study showed that aggressive behavior among mockingbirds might be due to high lead levels in the soil. In a study published in Science of the Total Environment, scientists looked at the aggression of mockingbirds compared with high and low levels of lead in the soil. The results were staggering, and it was found that aggression was several times higher among birds living in areas with high lead levels. This is especially concerning because more aggression means using more energy, and that could mean that mockingbirds have less energy left to feed their young or protect nests from predators.

Also be sure to check out our information on the Texas state flower, state tree, and other Texas state animals!