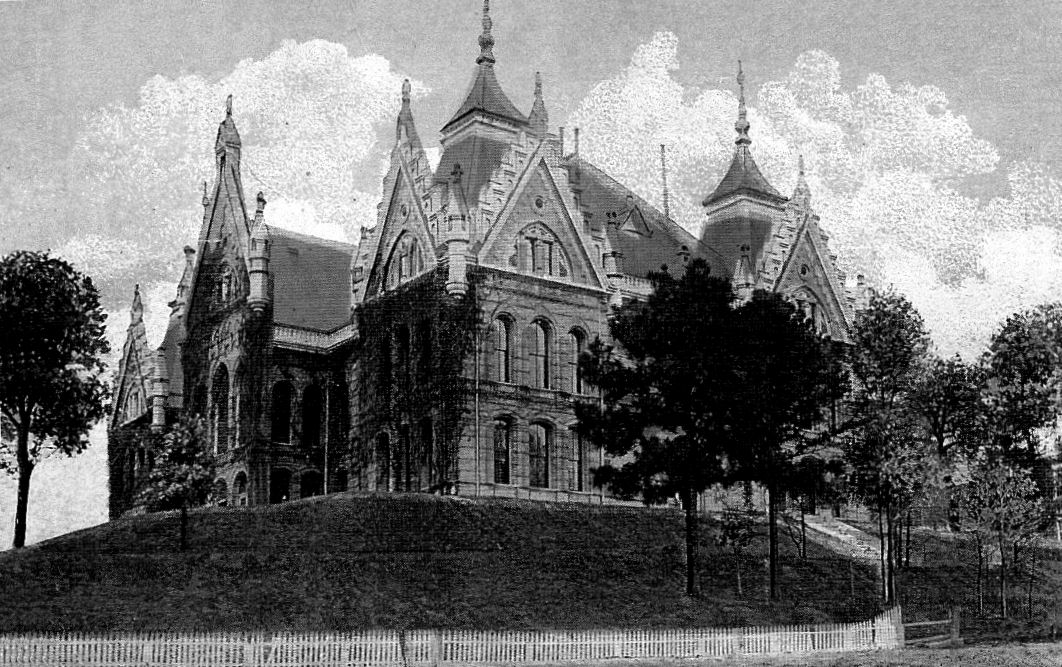 Originally chartered as the Sam Houston Normal Institute, Sam Houston State University was established in 1879 by the 16th Texas Legislature. It is located at Huntsville in Walker County at a site formerly occupied by Austin College.

The newly chartered institute opened on October 10, 1879 with 110 students and four faculty members. Built in 1851, the 28-year-old Austin College Building was adopted by the new teaching institute. After undergoing several significant remodeling projects, it survives as the oldest structure on campus and continues to serve SHSU today.


Another early campus building, Old Main, is shown below. It was constructed in 1889 but sadly was destroyed by fire in 1982.

As the first tax-supported teacher-training institution in Texas, SHSU became the model for others founded later. The opening of the school was due at least in part to a special agent of the George Peabody Fund who came to Texas in the winter of 1878-79 to offer the state financial aid in establishing such an institution. Control of the school was vested in the state board of education, which was authorized to appoint three citizens of Huntsville as a local board of directors. The law establishing the institute provided that two students from each senatorial district and six from the state at large should be admitted upon competitive examination as “state students,” whose tuition, board, lodging, and laundry would be paid by the state.

These state students obligated themselves to teach in the public schools of their respective districts for as many years as they received such aid. This policy was discontinued in 1910. The school opened on October 10, 1879, under the principalship of Bernard Mallon. During the early years the courses of study emphasized professional subjects and methods of teaching. In 1909 manual training, vocational agriculture, and home economics were added to the curriculum. In 1911 the course of study was expanded to four years, the last two years’ work being of college level to give the institution junior college status.

In 1915 the curriculum was again extended to include four years of college work leading to the B.A. degree, and in 1919 the first baccalaureate degree was granted. In 1923 the legislature changed the name of the school to Sam Houston State Teachers College. In 1925 the institution was admitted to the Southern Association of Colleges and Secondary Schools and subsequently to the American Association of Teachers Colleges, to the Association of Texas Collegesqv, to intercollegiate athletic conferences, and to associate membership in the American Association of University Women. Offering of graduate courses leading to the M.A. degree was authorized in 1936.

In 1911 control of the college was vested in a normal school board of regents. Extension of the physical assets of the college has accompanied the changes in control and the development in academic rank. In 1936 the Sam Houston Memorial Museum was constructed as a Texas Centennial project.

By 1948 the number of academic buildings had increased from one to twenty-five, and the campus had expanded from five to forty-seven acres. An experimental farm of 250 acres, the 630-acre instructional aviation field, the Josey School for Vocational Education, and practice-playing fields and gymnasium were included in the expanded facilities. In 1946 the state acquired for use of the school a former prisoner-of-war camp of 837 acres adjacent to the college community.

Property evaluation of the plant in 1948 was $2,417,973; midterm enrollment was 2,410; the faculty numbered 150. Sam Houston State Teachers College added a student union, a music building, a graphic arts building, and a vocational agriculture laboratory to the campus in 1951. An ROTC unit was established at the college in 1952. On April 21, 1954, the institution celebrated its seventy-fifth anniversary. By 1960 one quarter of the school’s graduates received their degrees in fields outside of education, pointing to the broadening of the college’s mission. Likewise the faculty was encouraged to spend more time with research.