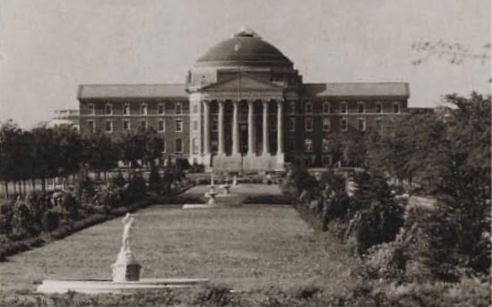 Southern Methodist University was chartered on April 17, 1911 by the United Methodist Church. Classes were planned to officially begin in 1913, but construction delays on the university’s first building prevented classes from starting until 1915. In the interim, the only functioning academic department at SMU was the medical college it had acquired from Southwestern University.

The creation of modern-day SMU was a direct result of earlier failed attempts to transplant Southwestern University in Georgetown, Texas to the Dallas/Fort Worth area. In the early twentieth century when then Southwestern University president Robert Hyer was unsuccessful in moving the school he presided over from Georgetown, Texas to Dallas (about 170 miles north) he resigned from his position at Southwestern and spearheaded the effort to start a new university that would eventually become Southern Methodist University.


Dallas Hall (pictured above) was the name given to the first official building on the SMU campus that opened in 1915. It was named in recognition of the $300,000 (a sizable sum in the early 1900s) that citizens of Dallas donated to lock in the location for the brand new university. Dallas Hall remains the centerpiece of the SMU landscape today.

Robert Hyer, the former Southwestern University president, became the first president of Southern Methodist University. One of his first notable acts as president was to select the school colors that are still flown to this day. In an attempt to associate his esteemed institution of higher learning with the most renowned placing of learning in the land, Hyer selected “Yale blue” and “Harvard crimson” as the school’s two colors to adorn all items related to the university including logos, athletic apparel, and stationary. In a further effort to garner association with the prestigious Ivy League, President Hyer named several streets in the area after accomplished schools including: Yale, Harvard, Dartmouth, Princeton, Tulane, Amherst, Villanova, and Marquette to name just a few.

In 1939, SMU was placed under the South Central Jurisdiction of the Methodist Church.

The school drew considerable adverse media attention in 1987 when the NCAA administered the death penalty against the SMU football program for repeated, flagrant recruiting violations. The punishment included the cancellation of the 1987 and most of the 1988 football season and a two-year ban from Bowl Games and all televised sports coverage.