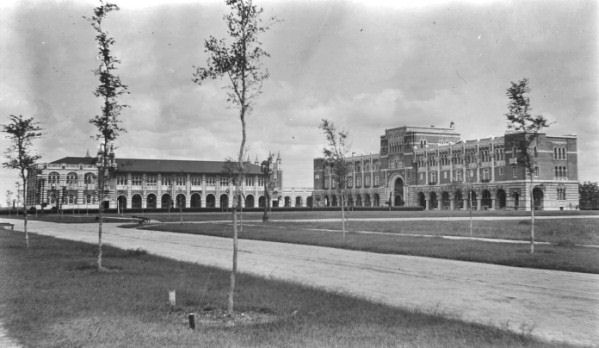 The Rice University first opened in 1912 after the murder of its namesake William Marsh Rice. But the saga of the school’s opening extends back a decade or so earlier.

On May 18, 1891, Massachusetts-born businessman William Marsh Rice chartered the William Marsh Rice Institute for the Advancement of Literature, Science, and Art as a gift to the city of Houston, where he made his fortune. The terms of the charter required that work on the new institute would begin only after Rice’s death.


campus
Rice Campus View Shortly after Opening in 1912
On September 23, 1900, Rice was chloroformed to death by his valet, Charlie Jones. Jones had conspired with an unscrupulous lawyer, Albert Patrick, to murder the aging millionaire and claim his estate using a forged will. When an autopsy revealed evidence of poisoning, Jones agreed to provide state’s evidence in return for immunity from prosecution. Patrick was convicted of murder and sent to Sing Sing. He was pardoned in 1912, the same year that classes began at the Rice Institute.

In 1907, the trustees of the Rice Institute acted upon the recommendation of Woodrow Wilson (then president of Princeton) and named astronomer and mathematician Edgar Odell Lovett the first president of Rice. Lovett called for the establishment of a university “of the highest grade,” “an institution of liberal and technical learning” devoted “quite as much investigation as to instruction.” [We must] “keep the standards up and the numbers down,” declared Lovett. “The most distinguished teachers must take their part in undergraduate teaching, and their spirit should dominate it all.”

The Rice Institute opened on September 23, 1912, the anniversary of Mr. Rice’s murder, with 77 students and a dozen faculty. An international academic festival celebrated the opening three weeks later, a spectacular event that brought Rice to the attention of the entire scholarly world. Four years later, at the initial commencement, 35 bachelor’s degrees and one master’s degree were awarded, with the first doctorate conferred in 1918.

Rice University is noted for its high academic achievements. Its emphasis on academics is demonstrated by a 5:1 student-faculty ratio, among the lowest in the nation. Despite its small student body (about 9,500 in 2012), the university has produced 101 Fulbright Scholars, 20 Marshall Scholars, and 12 Rhodes Scholars.