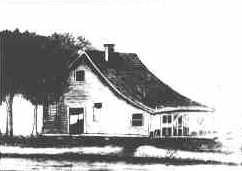 Now renamed and incorporated as the town of West Columbia, Columbia of the days of the Republic of Texas was located between the Brazos and San Bernard rivers in west central Brazoria County. It was founded in 1826 by Josiah Hughes Bell, who laid out the town two miles west of Marion (now East Columbia).

The town was known as Columbia during the Texas Revolution and served as the first capital of the Republic of Texas (from September until December of 1836). There the First Congress of the Republic of Texas convened, and Sam Houston was inaugurated president on October 22, 1836. The House of Representatives met in a two-story frame house and the Senate in a smaller house.


On November 30, 1836, Congress met in joint session and decided to move the seat of government to Houston because Columbia did not have adequate accommodations for government personnel. Stephen F. Austin, then secretary of state, died on December 27, 1836, in Columbia at the home of George B. McKinstry.

With removal of the seat of government, Columbia, now known as West Columbia, its role as a commercial center diminished.