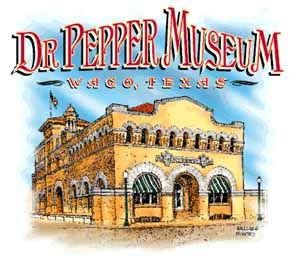 Dr. Pepper, one of the first major soft drinks, was invented in Waco, Texas by Charles Alderton in 1885. While working at Morrison’s Old Corner Drug Store, he experimented with making new drinks for the soda fountain customers. By blending the 23 available flavors, he came up with a unique soft drink formula. Dr. Pepper quickly became a bit hit.

In 1904 Dr. Pepper was featured at the World’s Fair Exposition in St. Louis. It has been promoted with many slogans through the years from “King of Beverages” to the “wouldn’t you like to be a Pepper too” commercials.


No one knows for sure but legend has it that Dr. Pepper was named for the father of a girl he had once loved. Another legend is that it contains prune juice – this is not true.

The oldest Dr. Pepper bottling plant is in Dublin, Texas. In 1891 S.H. Prim bought the franchise rights and began bottling Dr. Pepper. About fifty cases a day came from the plant in the beginning. You can still get the original formula there made with pure Imperial Cane Sugar. (the flavor is different and in my opinion, better) Other bottling plants changed to corn syrup in the 1960s.

Due to an unfortunate legal battle with Plano, Texas-based Dr. Pepper Snapple Group, the Dublin Dr Pepper Bottling Company will no longer manufacture Imperial Pure Cane Sugar Dr Pepper at its bottling plant as of January 2012.