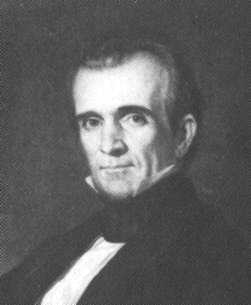 James K. Polk never set foot in Texas. His impact on Texas and the American West, however, cannot be overestimated. Not only was he instrumental in the annexation of Texas, but the United States achieved its greatest territorial expansion under his presidency.

Born 2 November 1795 in North Carolina, Polk spent much of his youth in central Tennessee. Trained as a lawyer, Polk’s interest in politics surfaced at an early age. He was elected to the Tennessee House of Representatives in 1823.


Fellow Tennessean Andrew “Old Hickory” Jackson took such an interest in the young statesman that for years Polk was referred to as “Young Hickory.” Under “Old Hickory’s” tutelage, Polk served seven consecutive terms in the U. S. House of Representatives. Upon Jackson’s urging, Polk ran and was elected Governor of Tennessee in 1839. He then became a darkhorse candidate for president in 1844.

Former President Martin Van Buren, the leading democratic candidate in the 1844 campaign, alienated the West and the South on the issue of Texas annexation. As a result, Van Buren failed to achieve the two-thirds majority then required for nomination at the Democratic convention. Unable to resolve the impasse, the convention, in their eight ballot, selected Polk as the compromise candidate. With the annexation of Texas as a key campaign issue, Polk went on to win the election.

As president, Polk achieved the marked distinction of making good on all of his campaign goals. These included the annexation of Texas, which became the 28th state with legislation that he signed on 29 December 1845.

Throughout his career, Polk sympathized with the Texans’ cause. Several of his friends and close relatives from Tennessee took part in the Texas revolution.

A workaholic worn out by four years in the White House, Polk died of cholera on 15 June 1849. His death occurred only a few months after his presidency ended, at the age of fifty-three. Polk County in east Texas in named after him.