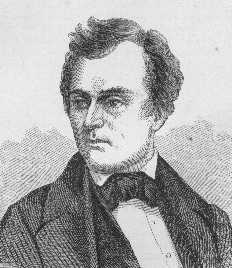 Born in 1798 in North Carolina, Burleson’s family moved on several occasions during his youth. One of these moves was to Missouri in 1814, to Virginia in 1815, then to Tennessee in 1824. Burleson gained a reputation as a military leader at an early age, first in command of a company of militia in Howard County, Missouri, and then as colonel of a frontier regiment in Hardeman County, Tennessee.

Burleson came to Texas in 1831 and settled near Bastrop on the Colorado River. When the Texas revolution broke out, Burleson was made second in command to Stephen Austin. He was in command of the forces that participated in the taking of San Antonio in the fall of 1835, and later commanded the first regiment of volunteers at the Battle of San Jacinto.


After Texas won independence, Burleson was appointed Brigadier General in charge of the limited forces of the Republic of Texas. He was very active from 1838 through 1841 in the challenging task of protecting the frontier from Mexican and Indian depredations.

After serving in the Congress of the Republic, Burleson was elected in 1841 to the position of vice-president of Texas. However, he returned to the field in 1842 to repel the Mexican invasions under Rafael Vasquez and Adrian Woll. During the Mexican-American war, Burleson enlisted as a private soldier and fought at Monterrey.

Finally retiring from field service in the defense of Texas, Burleson was elected to the State Senate, and while in that position died in Austin on 26 December 1851.