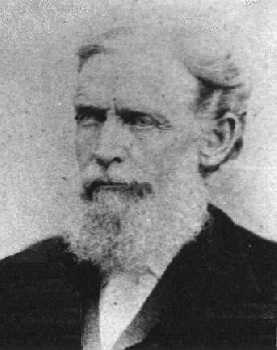 William Polk “Old Gotch” Hardeman has the distinction of having served Texas, in either a military or official government position, spanning a period longer than any other Texan. In 1835, within days after he arrived in Texas at the age of eighteen, he became an active participant in the Texas Revolution. When Hardeman died in 1898 at the age of eighty-one, he was still serving Texas–as Superintendent of the Confederate Soldiers Home in Austin.

Born November 4, 1816, William was raised in Hardeman County, Tennessee, named after his grandfather. After attending a term at the University of Nashville, he moved to Texas with his family in the fall of 1835.


With the Alamo under attack early the following year, Hardeman joined a small group under Philip Dimitt responding to William Travis’ call for aid. The group headed toward San Antonio to reinforce the Alamo defenders. They were spared certain death at the Battle of the Alamo, however, when they were cut off by Mexican pickets near Gonzales.

During the period of the Republic, Hardeman helped protect Texas’ western frontier in 1837 as part of Deaf Smith’s company of early Texas Rangers. Over the next few years, he participated in several Indian fights, including the Battle of Plum Creek in 1840.

By the early years of statehood, Hardeman had married, started a family, and established a successful plantation on the banks of the San Marcos River in Guadalupe County. In 1857 and again in 1858, he led 90-100 man gold hunting expeditions into the trans-Pecos region of west Texas, then controlled by Apache Indians.

With the coming of the Civil War, Hardeman was elected to represent Guadalupe County in the state Secession Convention. After the convention, he raised a company of men from Guadalupe and Caldwell Counties and joined the Sibley Brigade in an ill-fated attempt to take New Mexico and the American west for the Confederacy. By the war’s end, Hardeman advanced to the rank of Brigadier General and commanded a brigade in Louisiana.

Unwilling to take the Union oath of allegiance after the war, Hardeman joined other Confederate leaders in self-imposed exile in Mexico. While there, he surveyed lands for the government of Maximilian and briefly attempted to establish a colony of Confederate sympathizers in a section around Guadalajara.

After losing most of his wealth in the war and in an unsuccessful partnership set up to drive Texas longhorns to northern markets, Hardeman served the remainder of his life as a public servant. As such, he held appointments under every governor of Texas during the last quarter of the nineteenth century. As Superintendent of Public Buildings and Grounds from 1887 until 1895, he was responsible for installing the power plant that provided lighting for the newly completed capitol.

Hardeman died in Austin on April 8, 1898. He is buried in the state cemetery.