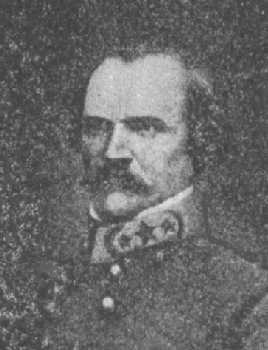 Born in Washington, Kentucky in 1803, Albert Sidney Johnston attended Transylvania University before graduating from the U. S. Military Academy in 1826.

Johnston resigned his military commission in 1834 because of his wife’s illness, and farmed near St. Louis in 1835 before coming to Texas to enlist as a private in the Texas army. Because of his military background, he advanced quickly. By early 1837 he was named senior brigadier general of the Texas army. This appointment resulted in a duel with Felix Huston, the man he replaced. Due to an injury suffered in the duel, however, Johnston was unable to take his new post.


Almost two years later, Johnston was appointed Secretary of War under President Lamar. He served in the Mexican War and later re-entered the service of the U. S. army. At the outbreak of the Civil War, Johnston again resigned his U. S. military commission and joined the Confederacy.

In the Confederate army, Johnston was appointed by Confederate President Jefferson Davis as a general in charge of the Western Department. On April 6, 1862, Johnston won the Battle of Shiloh but was killed in the conflict. He was temporarily buried in New Orleans, but his remains were later transferred to Texas for burial in the State Cemetery in Austin.