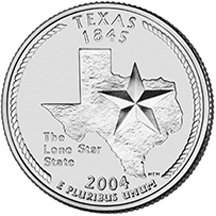 The Texas Quarter was the 28th coin to be issued in the 50 State Quarter Series from the United States Mint. The design of the quarter is meant to honor the qualities that make Texas great.

The top of the Texas Quarter says “Texas” with the year 1845 underneath – because on December 29, 1845, Texas became the 28th state to be admitted into the Union. In the center of the coin is the shape of Texas with a lone star. Texas has long been known as “the Lone Star State” as symbolized on our state flag. The lariat rope that surrounds the design honors the western history of the Texas cowboy and the cattle for which our state is famous. The overall design of the Texas Quarter represents the individuality of Texans and their “frontier spirit that tamed the land.”


The final design of the coin was revealed at the Houston Branch of the Federal Reserve Bank on July 12, 2002. The drawing of artist Daniel Miller of Arlington was chosen from over 2,700 entries.

At the unveiling ceremony for the Texas Quarter, Governor Rick Perry said, “This Texas quarter will serve as a timeless representation of our state’s proud and storied history. When Americans reach into their pockets and purses beginning in 2004, this quarter will remind all of the proud and rich history of the state that was once its own sovereign nation.”

The 50 States Quarter program will release a new quarter every 10 weeks in the order that each state was admitted into the Union. It will take 10 years for the series to be completed, ending in the year 2008. (5 each year) The design of each quarter is selected by the Governor of each state.